The Golden Globes frocks were kinda blah this year, with the women not only sticking to safe but also to stale dresses. But a few days on, some of the more unusual choices have stuck with me, so here are my favourites in order of preference. 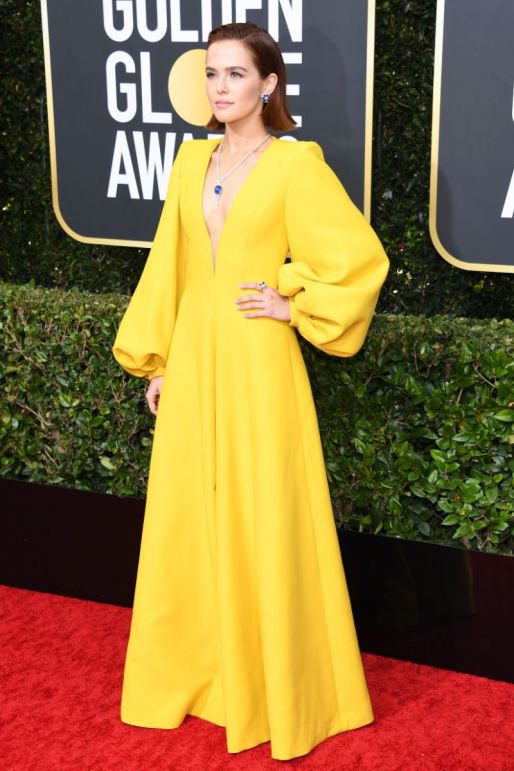 2. Zoey Kravitz in Saint Laurent: This would have been my top pick, because I can’t resist a good polka, not to mention two, but on second thoughts, I decided Zoey’s dress had more glam power. 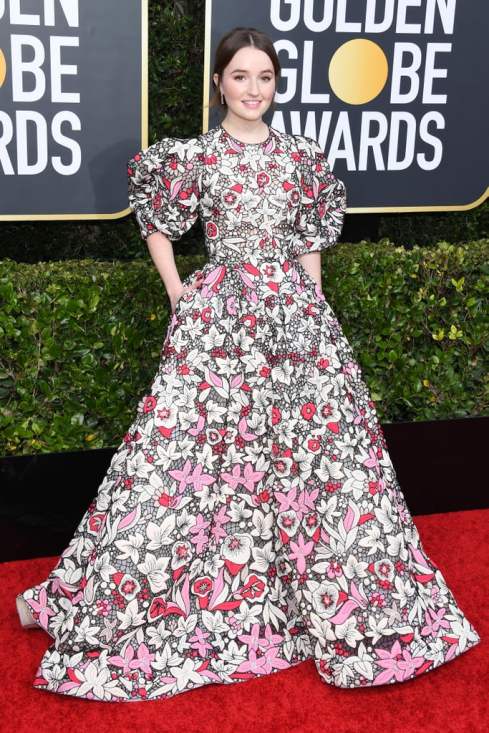 4. Taylor Swift in Etro: I went back on forth on this, but my initial reaction was yassss so I’m sticking with it. 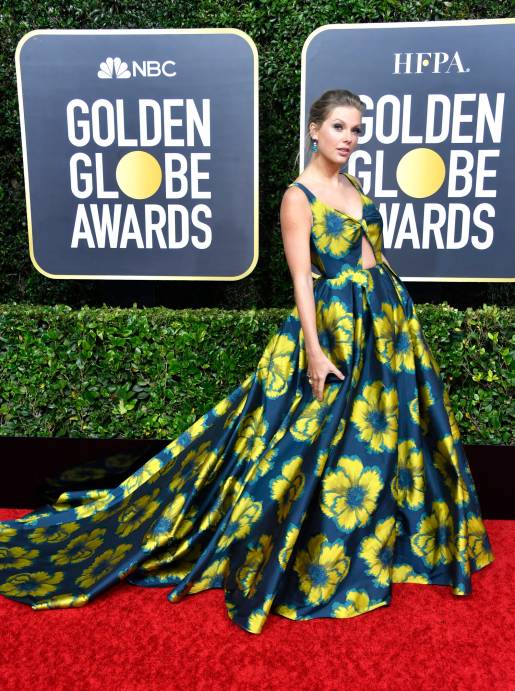 5. Kirsten Dunst in Rodarte: For straightforward pretty, with just that little quirk a la Rodarte.

Which were your favourites?

I don’t usually cover the Met Gala but there was so much breathtaking fabulosity this year plus I have been seeing some fairly ignorant memes on social media so I figured, why not?

The Met Gala is organized by the Costume Institute of the Metropolitan Museum of Art in New York. It’s a fundraising event that was turned into social marquee extravaganza by Anna Wintour of Vogue. Every year, there is a theme, based on the institute’s new exhibition.

This year the theme was “Notes on Camp”, taking off on Susan Sontag’s essay.

What is camp? Sontag says to talk of camp “to betray it”. Nevertheless, she persisted and so will I.

Sontag insists that camp is a sensibility and in that sense ineffable. It is hard to pin down its meaning, but we will try. The best illustration of camp, of course, is in its doing.

She cites Oscar Wilde:
“One should either be a work of art, or wear a work of art.” Camp is a mode of aestheticisation, that prioritizes form (in this case style) over content. It is not about beauty, but artifice.

Camp has a kitschy quality, so bad it’s good. It is by nature over the top. “Exaggerated”, “outlandish” are words that come to mind.

“The hallmark of Camp is the spirit of extravagance. Camp is a woman walking around in a dress made of three million feathers.”

This will explain the profusion of feathers on the Met Gala red carpet.

“One must distinguish between naïve and deliberate Camp. Pure Camp is always naive. Camp which knows itself to be Camp (“camping”) is usually less satisfying”

Thus the irony in people – especially people with a truckload of money and fashion designers at their beck and call – being asked the do camp. Yet, surprisingly, they mostly succeeded.

Further reading: Hamish Bowles musings on the theme. A Jezebel piece on why the theme sets celebrities up to fail.

And with no further ado, here are the ones I enjoyed the most:

Tom and Lorenzo pointed out that it is debatable whether Surrealism counts as camp – Sontag explicitly names Dali as not camp – but conclude that the eye that blinks clinched it in favour.

See how the eye just takes it into the “too much” territory that is definitely camp?

I heart this ensemble blinking eye camp or not.

Gaga has been doing camp for all long as she’s been on the international radar at least bit of late she had gotten kind of staid.

Here she reclaims her throne as Our Lady of Camp with three costume changes and a thousand bolts of theatricality. 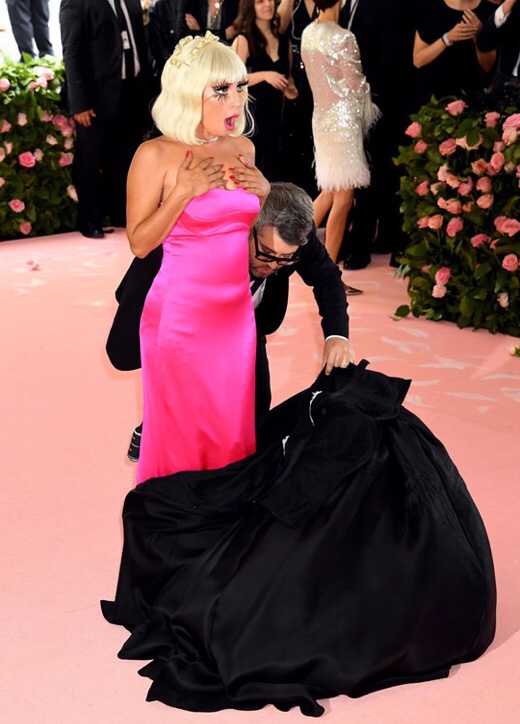 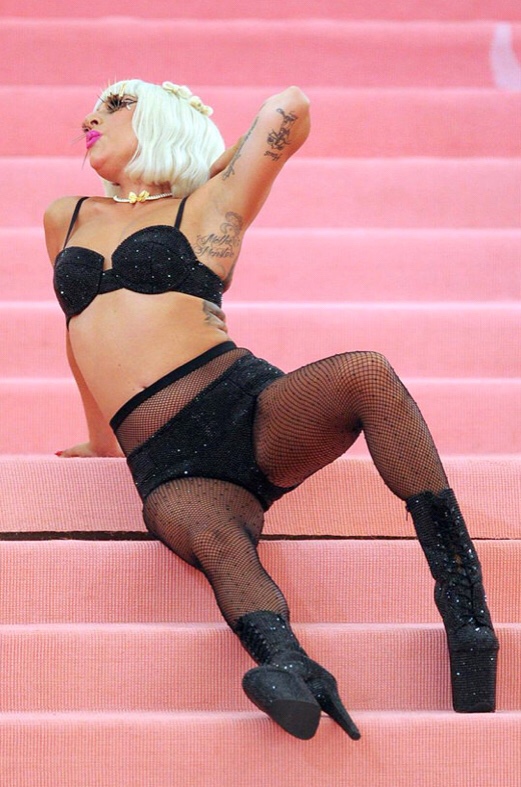 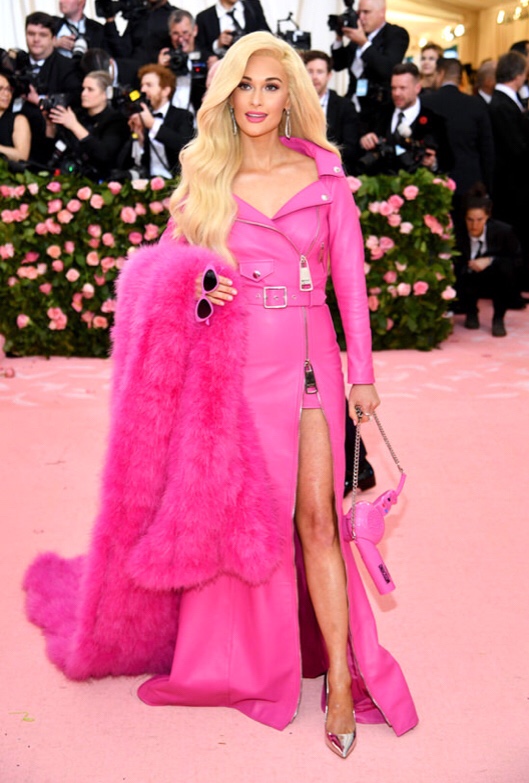 “Camp sees everything in quotation marks. It’s not a lamp, but a ‘lamp’; not a woman, but a ‘woman.'”

Camp is not trying to be ironic, but sometimes ends up being unwittingly so.

“Camp asserts that good taste is not simply good taste; that there exists, indeed, a good taste of bad taste”

“Camp is the answer to the problem: how to be a dandy in the age of mass culture.”

Androgyny is a strain of camp, as is drag as is the conversion of person to thing.

Love that so many dudes brought their A-game. 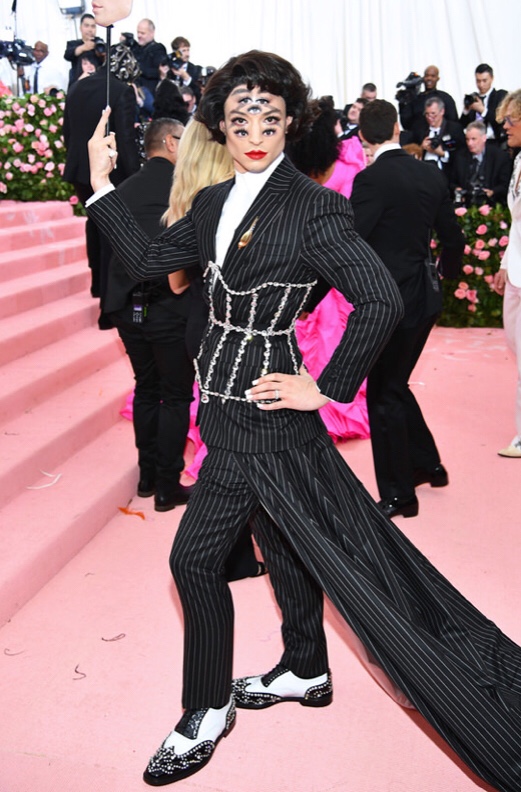 “Where the dandy would be continually offended or bored, the connoisseur of Camp is continually amused, delighted”

These ladies epitomize camp on the red carpet on a regular day but they did their best to outdo themselves. 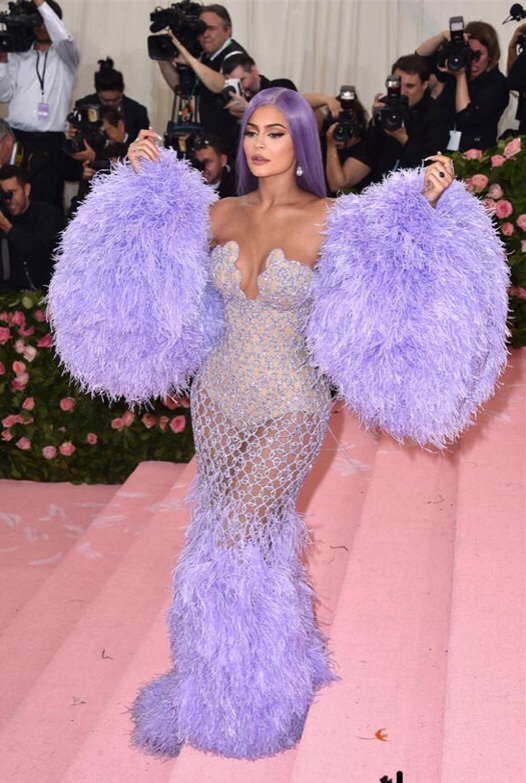 Kylie won this round. 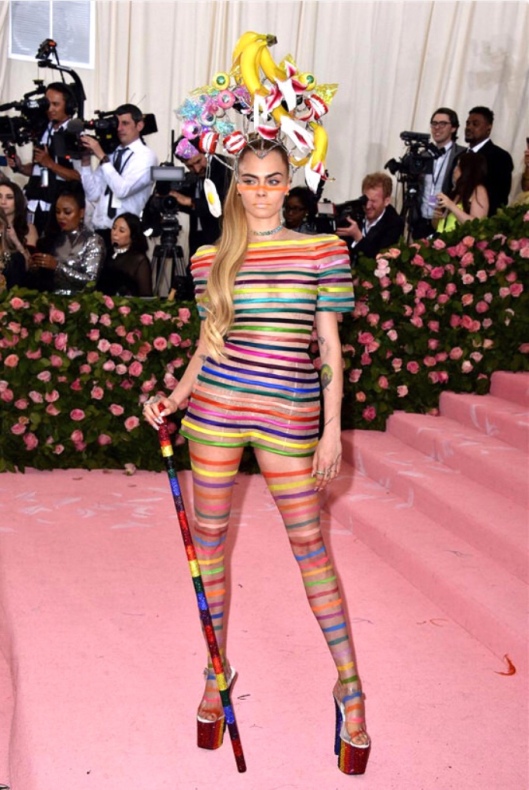 Who did you love?

There was a lot of pretty at the Oscars this year, and some straight up fabulousness.

First, let us all bow down to this stunning specimen. There is nothing to top this, and there won’t be for a long time, I suspect:

Helen Mirren proving again that she is queen. 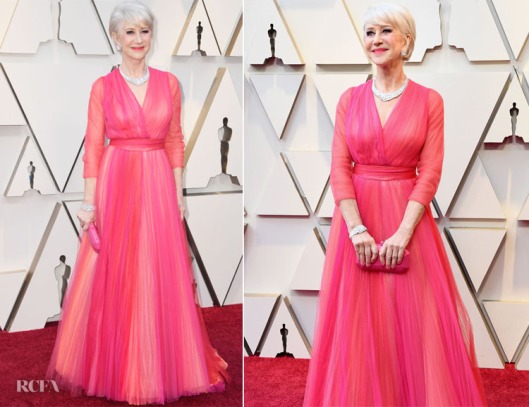 There was so much pink to choose from, which may be why I was excited by this year’s red carpet.

This confection on Kasey Musgraves

On Instagram, this was captioned Emilia Clarke in a sparkly dress. It’s Balmain bitches.

Gemma Chan having, as TLo put it, a Killing Eve moment. With pockets! 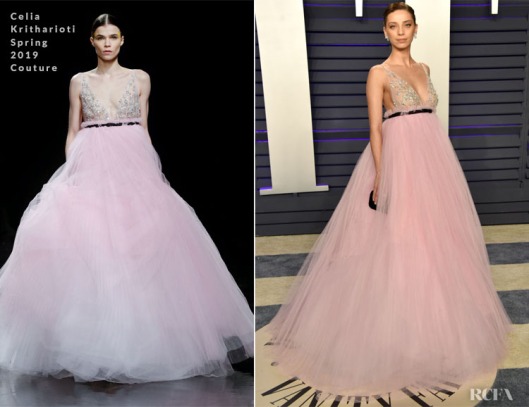 Angela Safran at the Vanity Fair party. My favourite pink of them all.

Then, there was yellow. 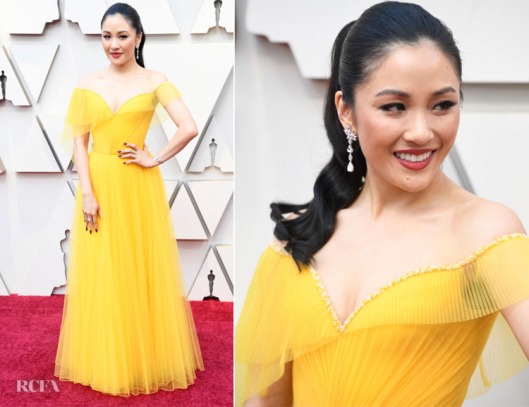 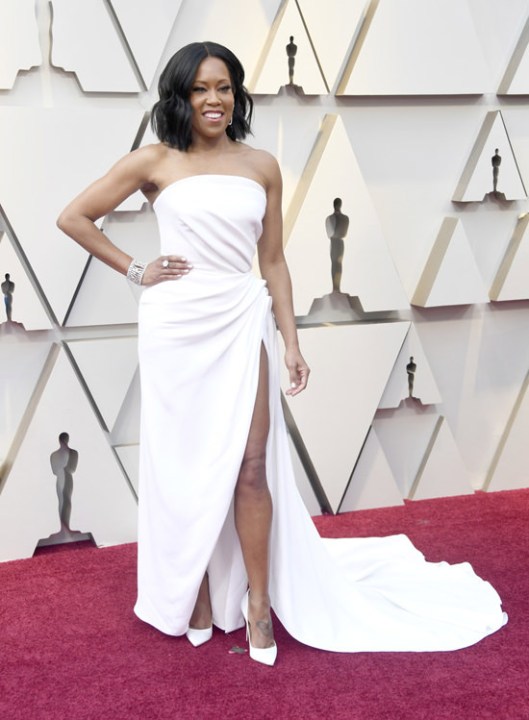 Could have done with better hair though.

There were some excellent reds.

TLo said Lady Gaga was doing an homage to Audrey. I get it, but also cannot shake the feeling that the hip structure was made for posing.

On the subject of black, there were some pretty fabulous tux renditions (apart from Billy Porter, obvs)

Not 100% sure about the apron-like think at the waist though. 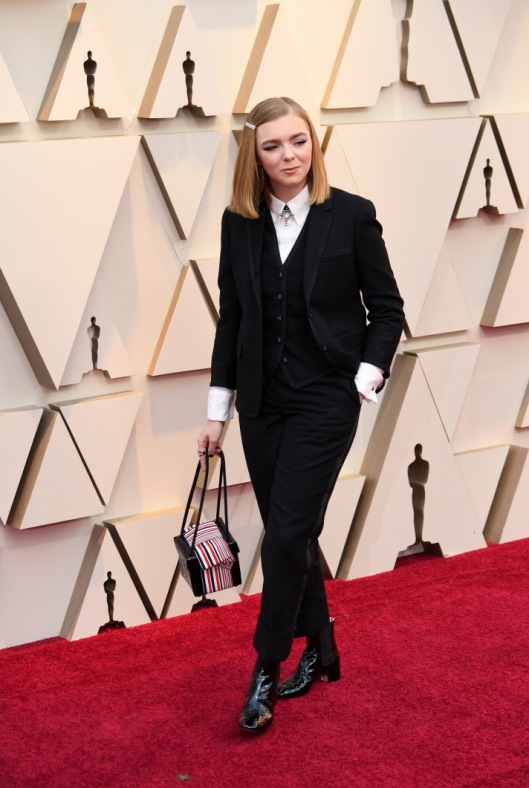 And I’m only slightly ashamed.

Here’s how it happened.

We were out at dinner and Mimi started shifting around (more than usual, that kid is a fidget) and I asked her if needed to use the toilet and she said yes.

While in what looked like an interminable queue, I checked Facebook and someone had posted a link to watch the wedding so I clicked on it, and it turned out it was right at the part when Harry and William were walking in, which meant I had skipped the waiting and people on the streets waving flags part. The next thing I knew I found myself grinning broadly as Harry gazed down upon Meghan in church (in between calls of “are you done”?) and I realised I’m not that cynical about weddings after all.

I ended up watching pretty much the whole damn thing using my data service if you please, which I have a strict rule against. V made fun of me and then gave up. I showed Mimi the couple while she was ranting about wanting ice cream now! and asked if the bride was pretty and she said “yes!” And went back to ranting.

1. Meghan’s dress was beautiful, her train even more (though the commonwealth flowers were unnecessary).

2. Harry is really into Meghan.

3. The queen’s lime green dress was a bit OTT. Not to mention the purple flowers.

5. Kate seemed to be in a bad mood. Maybe she doesn’t like Camilla or maybe she was pissed that Will didn’t change thr diapers last night.

7. The camera constantly focused on her mum who looked lovely.

8. Harry and Meghan were happily chatting while the hymns were going on. Haw!

9. That guy with the cello went on too long. As did the pastor – I tuned out during the sermon.

10. In a sign of our times, I found myself scared that there would be a terrorist attack as they drove down in the open carriage. I heaved a sigh of relief when they made it into the castle.

11. In between MinCat informed me that the chief minister resigned in Karnataka. High drama all around.

PS: I am aware the whole thing is ridiculous

As ever, I am not as interested in the movies as I am in the clothes. So here are my picks:

Kelly Marie Tran. Weirdly the gaping neckline is not
making me cringe as others have 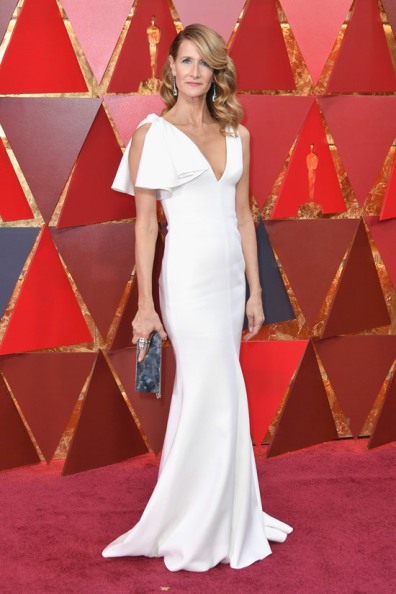 Helen Mirren. I love that she is giving the young ‘uns a run for their money.

Zendaya Coleman. Undecided on whether I wish it wasn’t brown.

Andra Day. Most of the gowns I loved were fairly traditional.
This though. I had to google who she is.

Allison Janney. Everyone went on about the gown she wore to the main event, but I like this better. I’m a sucker for white shirts though. 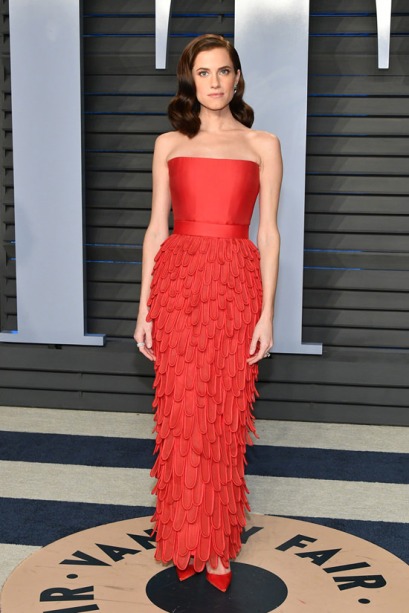 Allison Williams. Lots of people wore red. This is my fave.

Ava duVernay. Something about the hair and the dress.

Gal Gadot. I think I have a girl crush on this one. Aesthetically unrelated, but I recently watched Wonder Woman and after the initial part on the Amazon island, I was not that engaged. The whole helping the Brits win the war left me cold. Maybe I should have watched on big screen.

Meryl Streep. It’s red. So? I wish people would stop fawning over her unnecessarily. 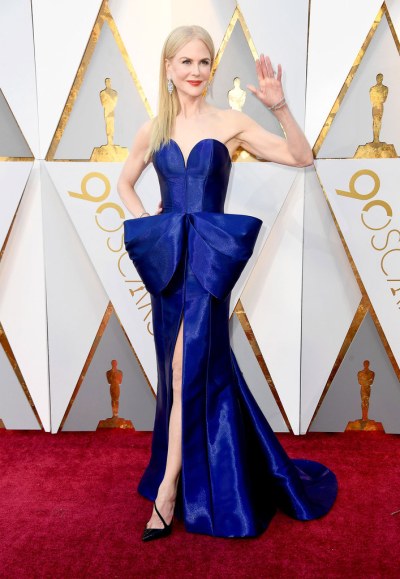 Nicole Kidman. Okay she does look better than she has in ages, dress wise. But I cannot get beyond how thin and pale she is.

Tom Holland. Although it’s fashionable to go on about men’s fashion, I normally find it boring, because, well, suits, and the occasional slouchy thing. But this one convinced me a little bit that stuff can be done even with a suit.

Which were your favourites?